A Description of the Memorial

The Unveiling of the War Memorial in 1929

A Description of the Memorial

The School War Memorial may be found in the entrance lobby to the old building. It records the names of 72 Old Boys who lost their lives in the Great War of 1914-1918.

The links on the names take you to further details on the Commonwealth War Graves Commission website or to brief biographies posted on Blunderbuss.

The wording on the War Memorial is as follows:

The Unveiling of the Memorial

The War Memorial, or Memorial Tablet, was unveiled on the afternoon of Old Boys’ Day, Saturday 20 July 1929. The event was fully reported in the December issue of the Farnhamian as follows:

The Memorial Tablet was unveiled at the School by Major-General Sir E. M. Perceval, KCB, DSO, on the afternoon of Old Boys’ Day, Saturday, July 20th, 1929, in the presence of a representative gathering of Boys, Old Boys, Governors, Staff, Parents, Friends, and, above all, Relatives of the Fallen. At long last, after a delay of ten years, the School has a memorial worthy of her beloved. It is a simple and beautiful bronze tablet, bearing the names of the seventy-one Old Boys who fell in the War. The inscription reads: “In memory of the Old Boys of Farnham Grammar School who gave their lives for their country in the Great War, 1914-1918.

The following is a brief description of the ceremony :—

A procession was formed in the playground, headed by the Rector (Canon E. M. Girling), Major-General Sir Edward Perceval, the Chairman of the Governors, Mr. G. F. Wright (Hon. Sec. of the Memorial Committee), and the Headmaster. The procession moved from the playground down the School field, and then between the guard of honour, consisting of the School Cadet Corps, who lined the steps to the main entrance. A halt was made at the foot of the steps, and a bugler sounded the “First Post.” The leaders of the procession then moved into the entrance hall, the Rector delivered a prayer, and Sir Edward Perceval unveiled the tablet. Immediately afterwards the buglers sounded the “Last Post,” followed by the “Reveille.”

After the Cadet Corps had marched past in single file, the rest of the School followed, and the whole assembly was addressed by the General on the terrace. His speech was solemn and impressive, and from it we mention the two following important points. Firstly, there was comfort for the bereaved when he stated his belief that comparatively few in the War suffered painful deaths. Secondly, he thought that the intention of those who died was to make war between civilised nations impossible.

The National Anthem was then sung and the Corps dismissed, after which a number of wreaths were laid under the tablet. They were from the Headmaster and Mrs. Morgan, the Old Boys, Mr. and Mrs. Starling, and Mrs. Andrews. The inscription on the School wreath was: “At the going down of the sun and in the morning we will remember them,” from the Boys of Farnham Grammar School, in proud and joyful remembrance.”

In the June 2009 issue of the Farnhamian, Cyril Trust, the OFA’s historian, wrote a short article on the War Memorial, noting that of the 71 Old Boys who died, only 20 of these names are shown on the town’s War Memorial in Gostrey Meadow. Cyril went on to provide some biographical information on three of the Old Boys who fell in the Great War, partly based on on research published in Henry Ellwood’s Remembrance Books, copies of which are held in Farnham Museum.

Checking Cyril’s entries against the School’s Memorial revealed that one name is missing, that of William Henry Bastow, who attended Farnham Grammar School between 1904-1909 and who was killed at Gallipoli on 26 November 1915.

This means the total number of Old Boys who fell in the Great War is 72 and not 71. It also raises the question as to how and why William Bastow’s name was omitted from the War Memorial when, at the time of its unveiling, there must have been members of staff and Old Boys who remembered him.

At the time of writing further research is being undertaken by Cyril to determine how this error arose. Furthermore, in marking the centenary of the Great War it would seem appropriate that this unfortunate omission is rectified.

On Saturday 8 December 2018 a short ceremony was held at Farnham College to unveil William Bastow’s name, which has been added to the School War Memorial tablet. You can read an account of this here. The booklet produced for the ceremony includes additional information on William Bastow and his family, which can be downloaded here (pdf format).

[1] Taken from the last line of Sir Henry Newbolt’s poem “Clifton Chapel”, which may be translated as “But as a soldier and for his country”. For the full context of this poem, visit the Epitaphs of the Great War website. 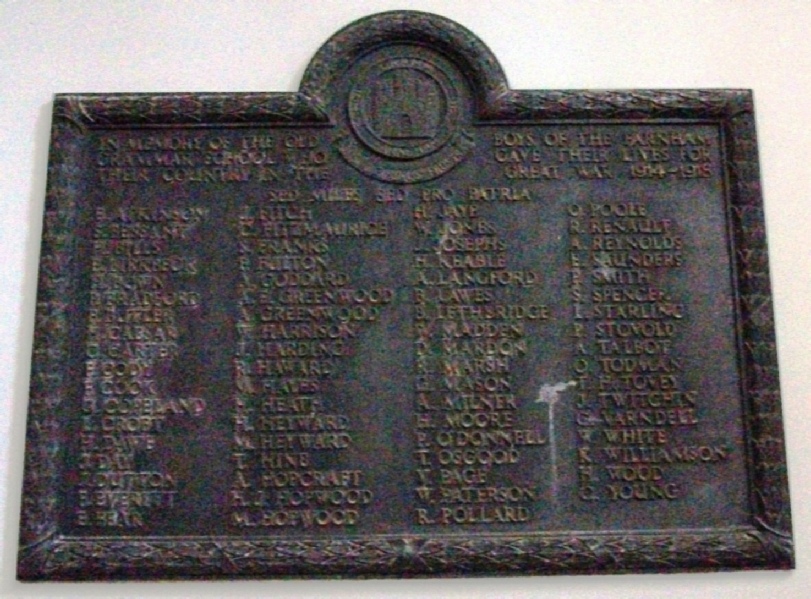